Oh Canada! Our home and native land…
A dream comes true!
The day of the Oath of citizenship
A significant moment in my life
I am a member of the Canadian family
Today my new family to me say:
Welcome Home!

These are the words I used when I posted about my citizenship ceremony in my social media. They were posted in languages I regularly use. I want to express my joy and my gratitude to this great country: Canada.

Taking the Oath of citizenship is the final legal requirement in order to become a Canadian citizen according to the website of the government of Canada. The oath can be taken in either English or French. The first part is allegiance to the Queen. Candidates can swear or affirm their allegiance (It will depend on whether the candidate wants or not to refer to their religious beliefs).

The day of the ceremony I arrived early. Once we gathered in the ceremony room, we were conducted to our seats, where we found a folder with a letter from the Prime Minister in English, a Canadian flag and some notes with the written words of the Oath of Citizenship in English and French, and the Canadian National anthem in English, French and the official Bilingual version. A video clip displayed some recordings about Canada and a message from the Prime Minister in English and French.

After the recitation of the Oath in both languages, we were called to receive the certificate from the citizenship judge. He took a minute to meet each of us personally and asked about what we do. I made a mention of my activities as a blogger. He asked me to write about the ceremony and here is my story.

At the end of the ceremony, we sang the National anthem. I sang it in both languages. It was a very emotional moment for me. After that, we proceeded with our own picture session.

I don’t remember how many countries were represented during the ceremony. What is the truth is that a multitude of languages, at the end of the ceremony, were unified in 2 official languages. We keep our languages, we are encouraged to speak in them and to make them part of this multicultural society. But English and French are our vehicles to share our thoughts with those who speak in a different language.

When I think about my new homeland, I remember the words pronounced by Sir Winston Churchill about Canada. I quote:

“Canada is the linchpin of the English-speaking world. Canada, with those relations of friendly, affectionate intimacy with the United States on the one hand and with her unswerving fidelity to the British Commonwealth and the Motherland on the other is the link which joins together these great branches of the human family, a link which, spanning the oceans, brings the continents into their true relation and will prevent in future generations any growth of division between the proud and the happy nations of Europe and the great countries which have come into existence in the New World.”
—Mansion House, London, 4 September 1941, at a luncheon in honour of Mackenzie King, Prime Minister of Canada. 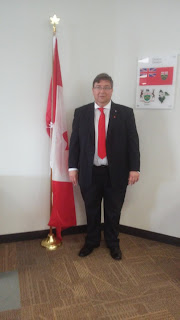 Recently, I read in Quora a question about the top bilingual combinations, or the most repeated language combination among speakers of 2 or more languages. I read several articles about the most spoken languages in the world, but I did not find any article about which are the most common combinations among bilinguals.

There are not many studies on this topic. We do not know for sure the answer in numbers of speakers. But we have a clue with the information we already know.

According to different statistics, the most spoken languages in the world by the total number of speakers are English, Mandarin, Hindi, Spanish, French, Arabic, Malay, Russian, Bengali, and Portuguese. It makes sense to think that any combination of speakers of those languages could be the top bilingual combination.

Let’s talk about English, the most spoken language in the world (Mandarin tops when we talk about the language with most native speakers). English is spread all over the world and is the de facto lingua franca of the world. It is difficult to think about a place in the world where you would not find English speakers. If we see the list of the countries with the most English speakers in the world, we can find the USA leading this list, followed by India, Pakistan, Philippines, and Nigeria. Then the 6th place corresponds to the UK, the country of origin of this language.

India is a multilingual country where languages like Hindi, English, and Bengali are the most widely spoken. The last Census of India2011 included data about the languages spoken and how many people can communicate using different language combinations. Hindi, with 692 million speakers, was the most spoken language. English was the second language and Bengali was the second language in terms of native speakers. I found that approx 88.5 million people declared their ability to communicate in English and Hindi, regardless of their mother tongue and how many languages they were able to speak. This number only included Bilinguals English – Hindi and anyone who can speak 3 or more languages and listed English and Hindi as one of their first 3 languages in proficiency. Those who can speak 4 or more languages, including Hindi and English and do not list both among their first 3 languages are not counted, but in my personal opinion, they do not represent an important change in the data given here.

Many years have passed since 2011, and the census India does not count Hindi – English speakers abroad. Today, we easily have more than 90 million speakers of both languages, which is more than we estimate for many other pair of languages, and most of them live in India.

Learn a language as the second language means some level of education. It would be interesting to see more research on this topic. But we might have a very large number of people who can speak English and Urdu.

The Philippines comes in 4th place in the number of English speakers, with approx 90 million. This number represents almost 90% of its population. According to Philippines Statistic Authority, the most popular local language is Tagalog. According to Ethnologue, there are approx 23.8 million speakers of Tagalog.

Mandarin is an official language in China, Taiwan and Singapore. The vast majority of speakers live in China. We are talking about approx 1.1 billion speakers. According to diverse sources, the second most spoken language in China is the Wu language (Shanghainese ). According to some sources, including Ethnologue, there are approx 81 million speakers of this language, which is also a variety of Chinese.  If we assume that all speakers of this language can speak Mandarin as well, we have here an important combination of languages. Still, there are more bilinguals Hindi – English.

If we ask, how many people can speak English and French, finding an answer will require very complex research. French is the only language spoken across five continents along with English. It is the second most used language in diplomacy.

But French is not massively spoken, and even inside the countries where French is the main language, the number of speakers is far from being the number of English speakers we can find in the US or India. On another hand, not all countries have statistics showing how many people can speak in both languages.

According to statistics from the site of Francophonie, there are approx 300 million speakers of French. The majority live in France with approx 66 million speakers, then we have DR Congo with 42.5 million and third comes Algeria with 13.8 million. 29 countries in total have French as their official language or at least one of them.

After reviewing different statistics from different sources, I came to the conclusion that there are approx 75 million people who can speak English and French. This number may not be accurate, but in my opinion, it is close to reality. This number is still below other bilingual combinations like Hindi – English, but in today’s world, this could be also the most important bilingual combination. Btw, I found numbers stating that there are more than 16 million English speakers in France and there are almost 11 million French speakers in the UK, more than Francophones in Canada which is officially bilingual. Probably France and the UK are the countries where more speakers of English-French live.

Arabic is a language spoken officially in more than 20 countries. Today, speakers of those languages have a close relationship with English and French. Historically, part of the Arab world used to be under British rule and another important part were under French rule and this is the reason why some countries are inclined to English and others to French.  The use of those languages, mainly English, in Professional and business environments is a second reason to keep using those languages after many years (English is a widely used language in the Oil industry for example).

Using the statistics from Francophonie, We can estimate that there are approx 40 million French – Arabic speakers. To estimate how many Arabic speakers can speak English as well is a difficult task. It is true that there are more bilingual speakers Arabic – English than Arabic – French. I could not find statistics showing me how many English speakers can speak Arabic. I read estimates from countries such as the United Arab Emirates or Qatar, where more than half their populations are proficient in English. But is it true that many of those speakers are expats and temporary workers who do not know Arabic. This example is replicated in other Gulf countries.

Malay is a major Austronesian language spoken in South East Asia. It is official in Indonesia, Malaysia, Singapore, and Brunei. Most of Its speakers live in Indonesia where a variety called “Bahasa Indonesia” is spoken.

According to the Census of Indonesia, there are approx 215 million speakers of Malay. This language coexists with more than 700 other languages. The most important of them is Javanese, with more than 84 million speakers. The census was conducted in 2010. We do not know how many people could speak both languages. In that time, Census Indonesia found that approx 16 million people were not able to speak Malay. Today numbers have changed, but we might have more than 80 million bilingual speakers of Malay – Javanese.

Portuguese is spoken by approx 243 million speakers. More than 85% of them live in Brazil. But most Brazilians are actually monolinguals. English is the most popular foreign language but the total number of speakers in this country is not even 9 million.

Japanese is mostly spoken in Japan. This country is not listed as having one of the highest numbers of English speakers.

There are not many pieces of research on this topic. The reasons could be political and logistical. We depend on numbers provided by different kind of organizations with limited scope and from statistics coming from national censuses where the language topic is not really important. Many censuses only consider speakers of the national language or divide people according to their native language.

A study of the total number of bilingual speakers of English – French would require a worldwide study, due to the scope of these 2 languages.

But it would be interesting to know how many people have the ability to speak in two specific languages. We could learn a lot about language needs to communicate around the world.